Boy in the Bubble's logo.

All Sorts of Trouble For the Boy in the Bubble Sketch Comedy is a live theatrical sketch comedy troupe currently based in Bloomington. In 2005, they became an officially sponsored organization of Indiana University. They often go by the shortened name Boy in the Bubble.

The troupe was founded in 1999 by then-sophomores (now alumni) Brad Fletcher, Carly Roetter, and Justin Treasure. Since then, it has given regular biweekly performances on Saturday evenings in theatrical venues around Bloomington as well as at festivals and events abroad. Despite their reputation for off-color and often shocking content, Boy in the Bubble still maintains a sizable and loyal fan base. As a thank you to the community, the shows are free and open to the public.

The group is open for hired events and can currently be contacted at maancamp@umail.iu.edu. 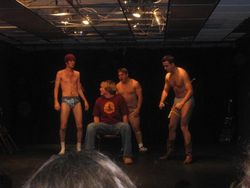 Members of All Sorts of Trouble for the Boy in the Bubble perform onstage.

All Sorts of Trouble for the Boy in the Bubble holds auditions for the troupe twice a year, traditionally at the beginning of each new Fall and Spring semester at Indiana University. The only requirement for membership is a majority vote from the existing members, based on the candidate's performance and creative writing talents. Membership cannot be taken away once a candidate is admitted. Upon graduation from Indiana University, a member is traditionally reclassified as an alumni.

Sketches written and performed by Boy in the Bubble are frequently criticized as being crass and exploiting shock value over genuine comedic appeal. However true that criticism may be, many of their sketches are relatively innocent, instead lapsing into the surreal or absurd. Recurring topics include finding new and inventive ways to describe sexual intercourse, how to deal with the bizarre or supernatural in everyday affairs, and realistically contextualizing pop culture mythology.

In 2004, Boy in the Bubble was rated 1st Place in the Indiana Daily Student's “Best in Bloomington” Reader's Poll, in the category of "Best Comedy Show." To date, 2004's IDS has been the only reader's poll Bloomington has ever held in this category.

Despite their sometimes risque onstage subject matter, Boy in the Bubble regularly fills their performance venues to capacity and remains a popular comedy troupe on the Indiana University campus. 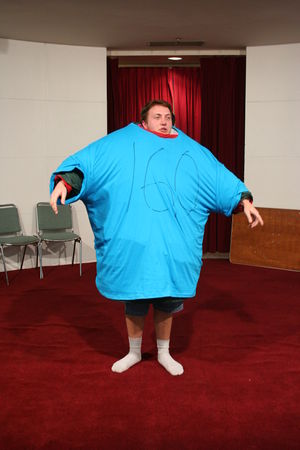 Aaron Waltke breaks the Guinness World Record for "Most T-Shirts Worn at Once" in the Indiana Memorial Union. 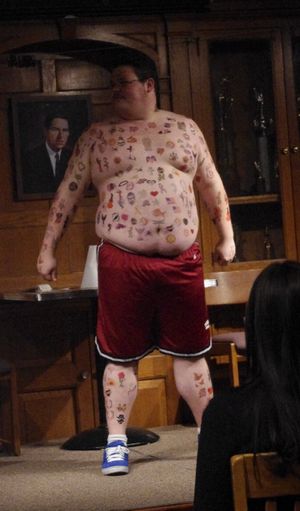 Casey Ellis attempting to break a world record for wearing the most temporary tattoos.

Since 2006, All Sorts of Boy in the Bubble has had a tradition of breaking a Guinness World Record once a year at their semester-end "Best Of" show to help promote the group. This tradition began with Bubble alumni member Aaron Waltke, who set the Guinness World Record for "Most T-Shirts Worn at Once" on December 9, 2006 by wearing a total of 160 T-shirts at one time, ranging from size Small to 10XL.

The tradition continued on April 28, 2007 when Jon Coombs, current member of Boy in the Bubble, broke the Guinness World Record for "Most Rubberbands Put on One's Face in a Minute" by wearing 57 rubber bands on his face. This feat eventually landed him a spot on "The Late Show" With David Letterman on September 24, 2007, where he attempted to recreate the stunt live.

On April 3, 2011, Boy in the Bubble member Casey Ellis unofficially broke the Guinness World Record for the most temporary tattoos worn on one person's body at once--300. The official record is still held by Allise Delaney from 2009 when she was recorded with 216 temporary tattoos on her body at once. She has no affiliation with Boy in the Bubble. 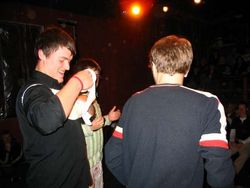 All Sorts of Trouble for the Boy in the Bubble plays to a full house at the Bloomington Playwrights Project.

All shows start at 10 p.m on Saturday nights.

The location and dates of shows are subject to change, although Boy in the Bubble usually performs every other week. You can find upcoming shows and other information on their Facebook page. 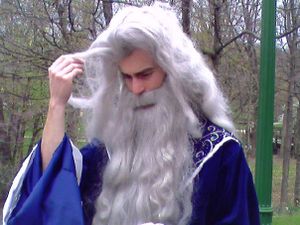 Arasmus the Wizard, a recurring character from previous years.