IUPUI completed a fundraising campaign in 2004 that generated over $1 billion, one of only 22 universities in the United States to achieve this. 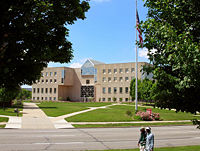 Created in 2005, the IU School of Informatics is the nation's first such school. IUPUI, along with IUB, hosts the first Ph.D. program in Informatics in the United States. The program offers tracks in bioinformatics, health informatics, and human-computer interaction.

IUPUI has more students from Indiana than any other campus in the state. It also has the largest population of graduate and professional students of any university campus in Indiana. Almost 75 percent of IUPUI classes have 25 or fewer students. In addition to its attendance policy, IUPUI also has the most ethnically diverse student body in the Indiana University system.

Because of the school of medicine and other graduate schools, IUPUI hosts research on infectious disease, cancer and degenerative disorders.

The IUPUI University Library is a leader in the application of technology to library services. IUPUI is participating in Internet 2 development. The project is housed in the Informatics, Communication & Information Technology Building (ICTC).

The vision for an IUPUI first was inspired by the formation of the Indiana Purdue Foundation in Fort Wayne in 1958 for the creation of what has become IPFW. Fort Wayne's Indiana Purdue Foundation is unrelated to IUPUI, but the formation of such a joint venture between Indiana's two largest university systems inspired metropolitan and state government leaders in Indianapolis to consider the same type of merger for their disparate Indiana University professional graduate schools, Indiana University undergraduate extension center, and Purdue University undergraduate extension center.

The School of Medicine's large campus west of downtown Indianapolis was chosen to be the site of what was to become IUPUI. Prior to forming IUPUI, other Indiana University and Purdue University schools were located at various locations within and near downtown Indianapolis. With the formation of IUPUI and the relocation of those academic units to the IUPUI campus adjoining the School of Medicine's Medical Center, some of those academic units for the first time were housed in buildings designed at time of construction for academic use, instead of business-office buildings as had been the case previously for the undergraduate extension centers.

The IUPUI campus covers 510 acres and is located just west of downtown near the Indianapolis Zoo, Downtown Canal Walk, and White River State Park. It is adjacent to the Indiana Avenue cultural district. In 2004 & 2005, new residence halls, the Informatics, Communication & Information Technology Building (ICTC), and Eskenazi Hall, the new home of the Herron School of Art & Design were completed on campus. The zip code for the entire campus is 46202.

Campus housing has the capacity for 1,060 students in a traditional residence hall (Ball Residence) and the Campus Apartments on the River Walk, which opened in 2004. Another residence hall is going to be built in order to accommodate 1,000 more students.

A large collection of archival photographs of the campus can be found in the IUPUI Image Collection. Ralph D. Gray's book IUPUI--the Making of an Urban University (Bloomington: Indiana University Press, 2003) is a comprehensive published account of the history of the campus.