Home to delicious authentic French and Algerian food, and coffee that's always fresh! It opened in September, 2004 after the owner, Hamid Maidi spent 10 months handcrafting the interior himself. Maidi came to Bloomington from Minneapolis and built the restaurant to resemble a similar cafe where he met his wife, Tammy, in Minneapolis.

As of Jun. 30, 2009, there was a sign on the door stating the location will re-open as an Indian restaurant. 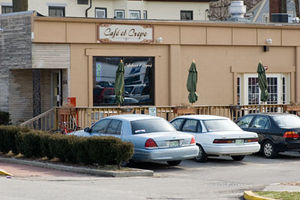 As seen from across 4th Street
Retrieved from "http://www.bloomingpedia.org/w/index.php?title=Cafe_et_Crepe&oldid=25325"
Categories: