Forgotten Treasures Used Books was located in Eagles Landing Mall on State Road 46 in Ellettsville. The staff consisted of one person George Morrison he did all the buying, shelving, selling and is sole proprietor of Forgotten Treasures Used Books. So he had a good understanding of his collection and if he did not have it or if you were not sure of the title or author he would try to use the internet to get an answer for you.

The condition of the collection overall was very good and consisted of about 50% hard cover and about 60% nonfiction. 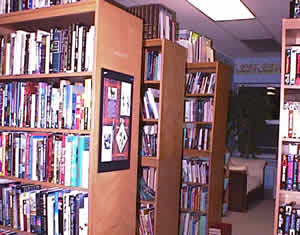 View of the store.