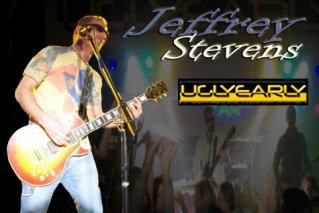 JEFF STEVENS (JEFFREY D. STEVENS) Birthdate 18 August 1972 is an American song-writer and musician. He was brought up in the small town of Orleans, IN and exposed to a diverse catalog of music at an early age. His father listened to music constantly, and although he didn't play an instrument, he was very influential in Jeff's playing and writing. "Everything from Roger Miller, The Beach Boys, The Stones, Herp Albert, Elvis all the way to KISS and Ozzy Osbourne was playing everytime my Dad was working or driving". Jeff, like several musicians, got his first taste of performing in church at a very early age. He started playing various brass instruments at the age of 7 for the school band. His father bought him his first electric guitar at the age of 12, an inexpensive Cort Effector from a Sears catalog. Jeff would have to wait some time to get his first amplifier (a Gorilla) so most of his initial practicing was done "unplugged" on an electric guitar. He then started taking lessons from well-known guitar virtuoso Darren Stroud, who now resides in California, and Dave Steele (Nashville, TN), who has played with Pam Tillis, Deanna Carter, Steve Earle, and currently Gary Allan. Going to church at a Church of Christ and being such a Beatles and Beach Boys fan, Jeff learned to sing complex harmonies at an early age. Jeff studied music theory under Dave Parman (original John Mellencamp bassist and guitarist) at Vincennes Univertity for two years from the ages of 17-19. Jeff has played countless shows and recorded hundreds of original songs over the past 20 years. He can still be found on stage almost every weekend. Jeff currently resides in Mitchell, IN and performs mainly with Ugly Early and Jeff, Dale, and Zero.

Jeff has one CD release "13 Circles" with Jacknife and numerous recording sessions logged. Jeff has also been known to hang out with the Beach Boys Band on occassion.