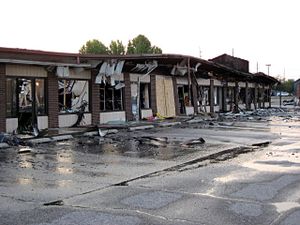 The remains of the destroyed building

At around 3:30pm on August 1st, a fire broke out at the Monroe County Pizza Department. Bloomington and Ellettsville Fire Departments where called on the scene. The fire quickly spread to neighboring businesses and destroyed over a quarter of the Whitehall Square storefronts. The cause of the fire is unknown at this time. The fire was brought under control around 4:30pm. Fortunately, everyone made it out of the businesses ok and nobody was injured.

The smoke from the fire ran over Curry Pike and police had to block traffic from passing through that area. A fairly large plume of smoke rose up into the sky that was visible for miles around.

Well into the evening there was a steady stream of cars driving through the road around the strip mall and parked in the Big Lots parking lot.

Throughout the month, officers from the Monroe County Sheriff's Department where stationed there all day and night.

By the 22nd of August, bulldozers had removed all debris from the north side of the building and also demolished the remaining section of that building up to the firewall, only leaving the original back wall and part of the north wall.

Some of the businesses affected by the fire have setup shop in other locations, like Tobacco Depot, John Cook of Pete’s Barber Shop and Kent DeFord Shelter Insurance. Monroe County Pizza Department is rumored to be moving to one of the buildings in Whitehall Plaza.

The Herald Times was on the scene around 4pm.

At least two TV choppers flew down from Indianapolis, WTHR-13 and WRTV-6. It was also covered by WISHTV-8.