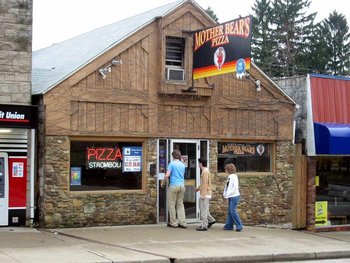 Mother Bear's Pizza is a pizza parlor. It has been critically acclaimed for its pizzas and recognized by People Magazine as one of "America's Great Pizzas". Their sign has a blue ribbon saying they are "4th in the Nation".

It first opened in 1973. There used to be another location on the corner of Walnut Street and 17th Street. It was closed in the late 1990s. That location is currently held by the Nomad's Buffet. Their sign in the 80s read "Mother Bear's Pizza Barn".

In 2006 they started expanding their dining area in the main location into the storefront next door. In the summer of 2007 the created another expansion of the dining area.

Sizes go up to 14". They have several specials, including an Early Bird special 4-6pm: order one 10"(?) or 14" pizza and get two free drinks and an order of breadsticks or cheese bread.

They offer wings with a few different sauces including a unique Thai sauce.