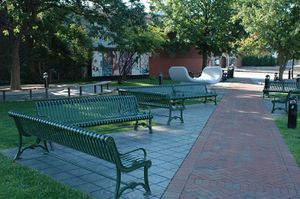 A 1/3 acre park formed when land was donated on December 17, 1976. It is located at the intersection of Kirkwood Avenue and Dunn Street.

In the late 1970s and early 1980s, various landscaping improvements and site amenities were installed at the park. In 1994, as a result of meetings with business owners, citizens and park users concerned about park safety and cleaniness, park site amenities were replaced. The locations of benches and tables were changed, additional lighting installed, exposed aggregate sidewalks were repaired, and additional trash receptacles and ash urns were placed. In keeping with the tradtion of the park as a gathering place for socialization, and due to limited capital improvment funds, no other significant improvements of physical changes have occurred in the park's 20-year history.

In 1995, a partnership with Rhino's All-Ages Music Club resulted in the construction of a mural wall, allowing club members the opportunity to display artwork in the park. In addition, seasonal outdoor concerts were held in the park. Both programmatic initiatives have been successful and well received by the public and park users. 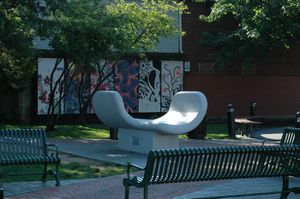 The sculpture in the park

Indiana University had recently completed significant landscaping, lighting, sidewalk and parking improvements in the area surrounding Peoples Park. These improvements, and the very intensive use of the park, highlighted what has been judged to be a "run down" or unkept appearance in the park. With endorsement and unanimous support by the Board of Park Commissionsers, and with discussion and unltimate approval by the City of Bloomington Common Council, the Parks and Recreation Department 1998 Budget included an appropriation of $123,000 in capital improvement funds for Peoples Park.

Peoples Park is located on the northeast corner of Dunn Street and Kirkwood Avenue and is managed by Parks and Recreation Department. In the autumn of 1968, Rollo Turner opened the Black Market on the land, which was owned by businessman and antiwar activist Larry Canada. The Black Market sold LPs, books, artwork, and African imports, and quickly evolved into a peaceful gathering place for Bloomington and Indiana University’s African-American community. In May of 1969 Turner would gain fame for leading a coalition of students and faculty in an occupation of IU’s Ballantine Hall to protest tuition increases.

On December 26th, 1968, the Black Market was firebombed by two local members of the Ku Klux Klan. The entire inventory of the business was lost, and the Black Market was forced to close its doors permanently. The countercultural space had failed to last three months before being attacked and destroyed. The building which housed the establishment was razed soon afterwards.

Larry Canada eventually moved away from Bloomington. His wife Kathy Canada retained ownership of the land that the Black Market had stood on, where students had autonomously begun filling the empty lot with flowers and vegetation. The students eventually named the lot ‘Peoples Park’ in honor of Peoples Park at the University of California-Berkeley, where an anti-war demonstrator had been shot dead by police in 1970.

Kathy Canada left Bloomington in 1976, and donated Peoples Park to the city, with the stipulation that it always remain a public park for the citizens of Bloomington. If the terms of the agreement were not honored, ownership of the park defaulted back to the Canada family.

During the Big Dig of 2000, Peoples Park was temporarily closed for excavations relating to the underground section of the Jordan River. It was reopened with new landscaping and its classic functional seating sculpture.

According to the February 10, 2002 The Herald-Times, Peoples Park was used by onlookers during the Greetings fire.

On October 9th, 2011, Occupy Bloomington took over Peoples Park. Roughly twenty individual tents now stand in the occupied space, as well as a community kitchen, a Peoples Library, and a large open tent where General Assembly is held. Occupy Bloomington has organized numerous marches, fundraisers for the homeless community, teach-ins, mic-checks of visiting politicians, and assorted direct actions. A thriving new civic space had been created for citizens to participate in a direct democratic process–the radical spirit of Peoples Park had been reawakened in downtown Bloomington in the fall of 2011.

From Mall Area: Take 3rd Street west past the IU campus. Turn right (north) at Indiana Avenue. Take Indiana to Kirkwood Avenue (T's into campus at the Sample Gates), and turn left (west). Peoples Park is on the right.