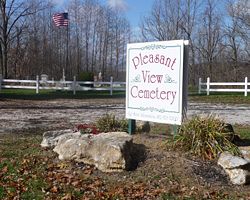 Pleasant View Cemetery is located in eastern Monroe County on Anderson Road. The majority of burials there are of the Baugh and Ruggles families.

One impressive monument in the cemetery is a statue of a World War I soldier over the grave of Thomas F. Riddle. In 2003, vandals knocked the solder down and broke the granite monument. No one seems to know when the statue was placed or the history behind it. Edith Clark, a caretaker of the cemetery, said she had heard stories that the Riddle brothers fought in World War I, but both died in 1919, one year after the end of the war.

People used to leave money in the statue's hand and on its hat for good luck. 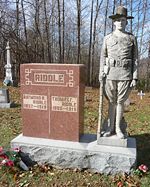