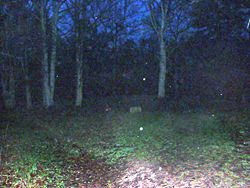 Stepp Cemetery is a cemetery located off of Old State Road 37 in the Morgan-Monroe State Forest.

The land that the cemetery sits on was originally owned by Reuben Stepp, who purchased it in 1856. He sold it to Will Peterson in 1884 when he moved to Texas. The State of Indiana purchased it in 1929. The trustees of Benton Township maintain the cemetery while the surrounding area is maintained by the Department of Natural Resources.

Stepp Cemetery is reputedly one of the most haunted areas of South-Central Indiana. Many urban legends are associated with it. A rumor of a snake-handling sect known as the Crabbites living nearby has been circulating for years. A stump in the cemetery is believed to be the seat of a woman who haunts the cemetery.

The only verified haunting was that of John Findley, who claims that for 2 or 3 weeks in August 1966, he and a friend "haunted" Stepp Cemetery, providing wolf howls, mysterious shaking bushes, and phantoms.

http://bit.ly/steppblog Short video clip that shows "something" on the stump in Stepp Cemetery.