The Stone Age Institute is a scientific research and education organization. It is a 501(c)(3) nonprofit institution that serves a broad spectrum of the general public. The primary focus of this organization is to conduct scientific research and to support scientists from all over the world who study human origins and the development of technology. In addition, The Stone Age Institute develops and sponsors a variety of public, community-based and internationally accessible, science education programs to educate the general public about science concepts and events that have had an impact on humans. THE STONE AGE INSTITUTE™ is the trademarked name for the organization, but the building in which the organization is housed is also often referred to as the Stone Age Institute.

Co-Directors Kathy Schick and Nicholas Toth, both Professors in the Department of Anthropology and the Cognitive Science Program at Indiana University, Bloomington, formed the supporting nonprofit, Friends of CRAFT, Inc. in 2000 and opened The Stone Age Institute facility in 2003.

The architectural plans for the building construction were drawn up by Bloomington’s Kirkwood Design Studio, managed and owned by Mary Krupinski. The building features a drystone tower, modeled after a Scottish, Iron-Age broch. Kirkwood Design Studio has won an architectural award for their design of The Stone Age Institute building, and Meyer-Najem Corporation won an award for its construction.

The Stone Age Institute is situated on 30 acres a few miles north of the city of Bloomington. Zoning restrictions do not allow the building to be open to the public.

The Stone Age Institute organizes and sponsors several events annually, held on or near the Indiana University campus, which are free and open to the public. Financial support for these public community events is provided by Friends of CRAFT, Inc./THE STONE AGE INSTITUTE™. 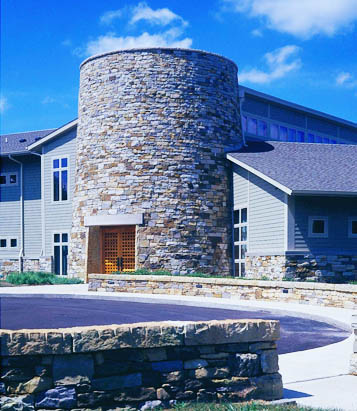