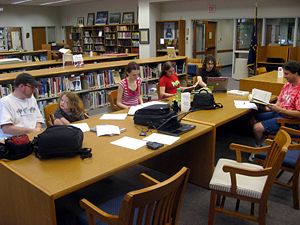 Wiki Weekends is a monthly event in which people interested in Bloomingpedia meet and collaborate on improving the site. They are currently held on the second Saturday of each month and the location is determined a few weeks prior to the meeting. Starting from this location, people talk about the site, ways to contribute to it and then go out and spend a few hours collecting information, taking pictures and contributing to the site.

The idea came about during a discussion in a Bloomingpedia Council meeting. Chris Eller suggested it as other sites have Wiki Wednesdays. However, Wiki Wednesdays held for other wikis are usually during the day, which makes it hard for several key people to be involved. So holding the meetings on a Saturday would hopefully attract more people.

Due to low interest, the meetings have been canceled until further notice.