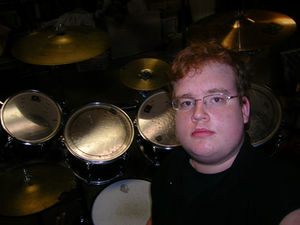 Self portrait of Grant

Grant is a musician and cinematographer; working with NJG and later with NJG Productions.

Grant has been playing drums for a little over 7 years, and co-founded local metal band Siddius. After forming Siddius, Grant played with them for the next 3 years, after leaving he has been doing solo projects, and some collaborations with Sam Julovich, Geoff Hutchinson, and Justin Hardy (lead guitarist of Siddius). Grant is a senior at Bloomington High School South and is a well regarded metal drummer in Bloomington.

Grant was born February 24, 1990 in Bloomington. Grant has lived in Bloomington his whole life and has loved music and drumming since a young age. He received his faithful drum kit at the age of 10 for his birthday and has been playing it ever since. After a handful of lessons, he stopped and branched off for many years on his own and stopped playing all together for almost 2 years. After many years of not playing he met Alex Welp. As 8th graders the formed the band, The Fallout. Adding Khalid Stekhavich on guitar and Geoff Hutchingson on guitar as well, the band was formed. After adding Justin Hardy on vocals The Fallout played their first show at the Jackson Creek Middle School talent show. After many good reviews and some not, the band dropped Geoff and Hardy. After performing as a 3 man show, they decided to try Justin out on guitar. In 2004 the band changed their name to Siddius. After many shows and many great years with Siddius, Grant quit the band. Now Grant is pursuing recording with other talented musicians and jamming. His skills are mainly seen in metal drumming with fast double bass work and powerful fills. Grant has told many that he is now training to become a better extreme metal drummer and is now moving into a more metal fusion state of playing, and in the next few years would like to be playing in a band again.