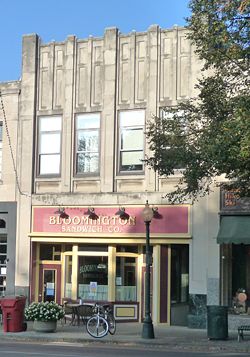 This address is a storefront that is south of the old Kresge Building.

Sometimes known as the Eagle Building, the building was built sometime around 1893. It has been the home to many different businesses over the years, including the Eagle Clothing Store.

The building originally had an Italianate brick facade, as illustrated in postcards from the early 20th century. In 1926 architect John Nichols created a Art Deco design with a twenty-foot recessed storefront, marble trim around the base plate and a tiled floor. In 1927 the owners, the Marxson Brothers, took bids and rejected them all. Nichols' design was eventually built in 1929.

In later years, the restaurants in the space brought the storefront even with the sidewalk to provide additional indoor seating, and put a new floor over the tile. But in 2010, after the Bloomington Sandwich Company closed, owner Tom Gallagher, restored the design from 1929.

The following businesses have been located in this storefront.