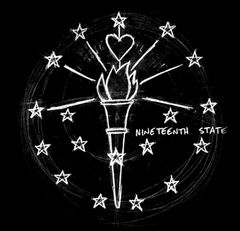 In 2005, a group of Bloomington residents with different artistic backgrounds gathered to make what would become 19th State's first completed work, The Gulf War Syndrome. The structure of the group and their working method grew organically during production of that film, working from a script by David Orr, who also composed most of the score, with Claytor handling most of the camerawork, Justin Vollmar recording and mixing sound, Nathan Vollmar acting and sharing editing duties with Claytor, and Jennie Orr serving as a production assistant. These five people remain the core group who meet to organize and plan 19th State's productions and future goals.

The group uses the term "The 19th State Collective" to refer to the loose community of people who have contributed to their works, in large or small ways, and typically bills screenings as being presented by the collective.

Many current and former Bloomington residents have appeared in 19th State films. Here is a list, including what parts they played:

19th State's style varies widely, from visual experiments such as Broken VCR and Time Lapse Experiment 3 to absurdist/surrealist comedies such as Live Ones and Puzz to more traditional video-for-hire work such as their 2008 video made to support the fundraising efforts of Mother Hubbard's Cupboard.

19th State is currently working on a variety of short projects to shoot during the summer of 2009.