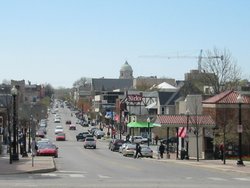 Kirkwood Avenue as seen from the Sample Gates at IU

Bloomington is a diverse city in south central Indiana. Located about 50 miles southwest of Indianapolis, it is the county seat of Monroe County, anchor of the Bloomington Metro Area, home of Indiana University, the Kinsey Institute and of Cook Group.

With a year-round population of about 80,000 people. Bloomington is the 6th largest city in the State of Indiana by city population and is the 5th most populated region of Indiana. Bloomington boasts generous green spaces as well as a well developed Downtown area.

Surrounded by lush forests and rolling hills, there are a number of excursions that residents can visit on day or weekend trips. Bloomington has been named a Tree City for more than 20 years and is enjoyed by its residents and visitors for its beautiful scenery and parks. 100 Important Things To Know About Bloomington is a good article to get people up to speed about Bloomington.

The region surrounding Bloomington started to become populated around 1818, only 2 years after Indiana became a state. The area was first seen by Col. John Ketcham and Dr. David Maxwell as Rangers led Indian raids in the area. In 1820, with the cooperation of the First Presbyterian Church, the State of Indiana founded the State Seminary School which was renamed Indiana University in 1838. Much of Bloomington has been based around IU over its almost 200 year history. The city also became a center for the limestone trade, and in recent years the center for medical companies such as Cook Group.

Major events in Bloomington include the Lotus World Music and Arts Festival, an annual celebration of multiculturalism in Bloomington; The Little 500, which is known as the premier intramural collegiate cycling event in the nation; the 4th Street Art Festival, a three-day festival of more than 100 regional artisans; the Hilly Hundred, a three day bicycle race.

The first businesses in Bloomington were heavily based around supporting the state-run school. These businesses included a smithery, tanner and coal facility. In the mid 1800s the Showers Brothers created a large furniture manufacturing industry, and at one point had the largest furniture manufacturing facility in the world. This building is now called Showers Plaza.

Bloomington is now the home to over 1000 businesses, large and small. The limestone industry is centered just south of Bloomington in the town of Bedford, however Bloomington and Ellettsville host the Indiana Limestone Sculpture Symposium as an annual event.

Bloomington has always been known for its diversity as it hosts students and residents hailing from 130 different countries who speak over 40 different languages. Bloomington has established relationships with three sister cities.

Although much of the city's entertainment is based around IU, Bloomington is a regional center for cultural events, concerts, dining, tourism, sporting events, museums and much more. Bloomington has also had its fair share of famous residents. Bloomington also boasts many opportunities to view public art in the form of statues, murals and even graffiti. Bloomington also has a locally produced glossy magazine, Bloom Magazine is a bi-monthly publication covering local interests and events.

Besides the prestigious Indiana University, there are many other schools in Bloomington both for children and adults. Ivy Tech has a large campus on the west side of Bloomington offering vocational and technology training. The Waldron Arts Center provides art classes open to anyone.

Indiana Holistic Health Network - provides a Directory of Educational Resources in Bloomington and the state. http://www.indianaholistichealth.net/educationalresources.htm

Awards and other mentions

Listing of city parks and other recreational areas maintained by the city Parks and Recreation Department. The Excursions Category article is also a good reference for recreational opportunities.

Roads and topology as well as Construction Projects currently going on.

Bloomington is situated in an area of hills and valleys. The area is rich in limestone deposits and karst features.