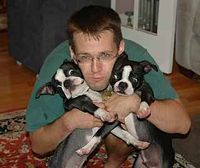 Ashley was first enrolled in University Elementary School where he was a part of the Gifted and Talented program for the fourth through sixth grades. Here, he gained a reputation as both reserved and yet fiercely competitive, known for his vocal disbelief at having finished second in various reading contests in which he was convinced the first place student had forged the number of pages read to win the battle.

On one occasion, the NBC television network filmed his classroom as part of a series honoring the work of his teacher. This day, he was not on his best behavior, and NBC aired a clip of his teacher noting, "I'm not proud of Ashley...and Nick" Undoubtedly, such lack of respect fuelled the characteristic cynicism that remains an essential personal trait.

Beginning in August of 1992, Ashley was enrolled at Tri-North Middle School where he was known for both his outstanding understanding of advanced biological concepts as well as his penchant for wearing Umbro brand soccer shorts in even the most frigid weather conditions. While wearing this attire in the gym during lunch on one occasion in the eighth grade, Ashley was "pantsed" by Eli Daggy.

He continued to be involved in the Gifted and Talented program while in middle school. In Ms. Connie Austin's seventh grade social studies course, he was assigned to study the country of Burma.

In 1994, Ashley began his studies at Bloomington High School North(BHSN), where he participated in soccer and Science Olympiad.

He showed a preference for the Adidas Samba shoe, which he would wear far beyond its intended period of use. When the shoes began to break apart, he would use the sole of the shoe to flick cigarette butts at people and inanimate objects.

Ashley first attended Indiana University in 1998, living in Read Hall. He later transferred to Carleton College, where he received a degree in biology and examined breast cancer genetics for his senior project.

While at Carleton, Ashley was a key member of the college's third division intramural championship basketball team his junior season, for which he received a priced t-shirt as a reward. He also participated in the Stone Skipping Society.

Ashley graduated from Carleton College in 2002.

Following graduation from Carleton College, Ashley worked in laboratories at the University of Minnesota for two years, and at Indiana University for one year.

On June 11, 2005 Ashley married Annie Kim Park at First United Methodist Church in Bloomington, whom he had been dating since 1998. They now reside in Jamaica Plain, Massachusetts where he is pursuing a PhD in immunology at Harvard University. They are the proud parents of a beautiful Boston terrier, Marvin.

While Ashley is known to have played soccer beginning in early childhood, his skills as a player truly began to blossom during fifth grade recess practice sessions on the blacktop football field at University Elementary School. He further developed his deft touch and defensive prowess during a stint at the Indiana University Soccer Camp in the summer of 1992. There Ashley and his camp roomate, fellow Bloomington resident Jonah Skoog, were dubbed "The Bloomingtonians" by their instructors. He represented the Bloomington Barons, Bloomington United, and the Cutters[[1]] over his 10 year career in Bloomington's youth soccer community.

During Ashley's high school years he continued to evolve as a footballer under the tutelage of coach Dan Matthews (AKA Danimal AKA Dan Juan DeMatthews). He quickly settled into the role of holding midfielder/enforcer for the Cougar squad. Much like his favorite player, Dutch International and Tottenham Hotspur midfielder Edgar Davids, Ashley was known for his vicious (yet legal) tackles on the pitch. At various points in his tenure as a player at BHSN, Ashley could be observed full-volleying an unsuspecting opponent in the rib cage, fracturing the ankle of another during a 50-50 challenge, and breaking an opponent's rib after Ashley was the victim of a cheap shot during a post tackle scuffle. A majority of these devastating challenges were the result of Ashley's inconsistent ability to keep the ball close to his feet when dribbling, a fact which Ashley aggressively disputes.

Ashley's most notorious encounter as a player occured during the fall of 1997 when his BHSN team played Bloomington High School South (BHSS) in the regular season. The BHSS squad included a similar enforcer in midfielder Aaron Breeden, whom went on to play college soccer at Emory University in Atlanta. Ashley and Aaron clashed twice on the pitch during 50-50 encounters, the second of which resulted in Aaron being launch into the air and his subsequent removal from the game due to injury.

While Ashley was a feared tackler of the ball, he also possessed excellent field vision and passing skills and was adorned with All-Conference Honors after his senior year at BHSN.

Ashley returned to the pitch his final two years at Carleton College where he again served his role as punishing defensive center midfielder for the junior varsity squad, setting the tone for his younger teammates.

Referred to by its streetnames "loaf," "meatlog," and "The Wondrous Loaf," any ground meat product mixed with unrelated ingredieants, baked, and served with ketchup can expect a very short lifespan. He also pioneered a novel form of conglomerate meat dish known as the "Meat Muffin."

Beware the small man with something to prove. Throughout his college eating career, Mr. Moseman was witnessed on many occasions to consider a large bowl of "Guac" an appropriate main course.

In January 2002, Ashley Moseman was quoted in "The Carletonian" as saying "I love salt. I even put salt on my salt. Salt, salt, salt."