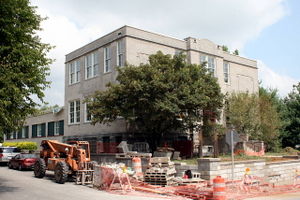 During some construction in 2008

Community center run by the Bloomington Parks and Recreation Department, located on West 7th Street. The Center hosts kids and youth for after school, evening and Summer events.

The building was originally the Banneker School, built in 1915. Edwin C. Doeppers designed the building and J. O. White was the general contractor. At that time Bloomington public schools were segregated and the school was built for use by African-Americans, so it was also referred to as 'the Colored School'. Many African-American families lived in the area because it was near the Showers Brothers Factory that employed people of all colors.

In September of 1951 white students attended school with African-America students at the Fairview Annex ending decades of school segregation in Bloomington.