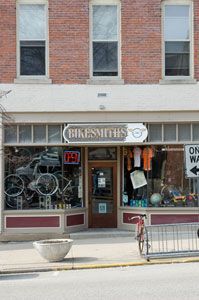 Bikesmiths was founded by John Smith in 1975 as ReCycles.

The business then was a used bicycle shop located at 108 W 3rd Street from April 1975 until April 1980 when it was moved to 112 South Dunn Street. After two years at the Dunn Street location, the economics of Asian import bicycles brought the cost of new bikes down. ReCycles was no longer able to offer acceptable purchase prices to those selling their bikes and still be competitive with the new bikes from Taiwan and Japan, so ReCycles began selling Nishiki, then Lotus Bicycles as well as Bianchi Bikes from Asia and Italy.

After two years of ReCycles selling new and used bikes, it was decided that the name ReCycles didn't quite fit. Customers where telling Bikesmiths that they assumed no new bikes with the name ReCycles. The name Bikesmiths came out of a ReCycles staff brainstorming session at Mother Bears. At the time, Wheelsmiths was a up and coming shop in Palo Alto California making a name for itself by producing quality stainless steel spokes. The name Bikesmiths was selected despite the similarity to the owners name, "Smith". It seemed a good name for the times.

In 2009, Bikesmiths Bloomington represents the bicycles of Cannondale and Giant.

Bikesmiths is frequently voted Bloomington's Best Bicycle shop. The walls of Bikesmiths are adorned with memorabilia including various awards, sponsorships and historic relics including some from the movie Breaking away.

The popularity of Bikesmiths comes from the quality of the products, the staff of experienced mechanics who also serve as customer service staff and everyday low pricing. 112 S. College is 1/2 block South of the Monroe County Courthouse and 1/2 block east of the B-Line Trail.