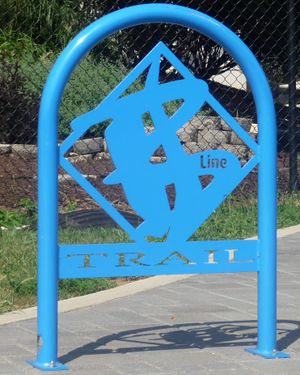 The B-Line Trail is a downtown trail to the west of College Avenue. It is paved and wide enough for several people to walk or bike side-by-side (12' wide asphalt with 2' wide gravel shoulders on both sides).

The trail currently extends a total of 3.1 miles from the east side of Adams Street, through the downtown, through the switchyard property, and to the north side of Country Club Drive. The first portion opened was ~0.6 of a mile in length, starting at 2nd Street just west of Kroger, and going north to Kirkwood Avenue before curving off to the northwest and hitting Rogers Street across from the former Fell Iron & Metal.

There are small plaza areas south of City Hall, next to Showers Common; west of the WonderLab Museum; behind the Convention Center, just across the pedestrian bridge over Third Street; near Seminary Square south of Second Street and at Adams Street. Generous financial support from IU Health Bloomington helped provide two fitness stations along the trail just south of First Street. Some restaurants, such as Le Petit Cafe provide walk-up service from the trail.

The trail follows along the old CSX Railroad that ran through central Bloomington. It started development in May 2008 and was officially opened in 2009. The project was started by Mark Kruzan as a part of a way to revitalize downtown Bloomington.

The Federal Highway Administration provided $5 million for the project through the Indiana Department of Transportation. The Indianapolis civil engineering firm Butler Fairman & Seufert worked on the project and also worked on the Clear Creek Trail. Cornerstone Planning & Design were also involved with the project. 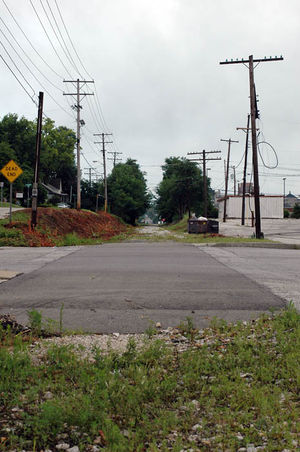 under construction
Retrieved from "http://www.bloomingpedia.org/w/index.php?title=B-Line_Trail&oldid=31283"
Categories: