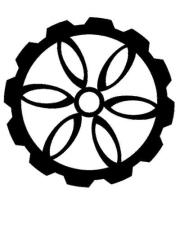 Bloominglabs is Bloomington, Indiana’s hackerspace. Hackerspaces are workspaces where people gather to work on projects and share tools and experience, and sometimes drink beer, eat pizza, or engage in other social activities.

Bloominglabs originated when Nathan ‘dosman’ Heald (part of the Bloomington FOOLS lock-picking club and former host of ‘The Packet Sniffers’) and Jenett Tillotson (formerly of the IU Robotics Club) decided to start a hackerspace in Bloomington, and began seeking out other people who were not only interested in the idea but also serious about being part of it and making it happen.

Nathan set up a mailing list for the group, and following some mailing list discussions and initial meetings in early 2009 at restaurants around town, the group started holding proper meetings in Jenett’s basement. Members worked on and talked about projects including IR harps, laser interferometers, solar power monitoring systems, Arduino and AVR programming, and of course robotics.

The group got some national publicity when local writer and social media guru Kevin Makice wrote about The Collaboration Room and the Bloomington Hackerspace Initiative in the Wired blog Geek Dad. Member Joe Stone was at the Detroit Maker Faire the weekend of July 31st and sat on a panel about hackerspaces along with Mitch Altman. Bloominglabs and The Collaboration Room have also been mentioned on the Make Blog.

BloomingLabs held a series of workshops at The Collaboration Room in July 2010 on topics including soldering, Arduinos, and AVR programming. In August, Mitch Altman (creator of ‘TV-B-Gone’, founder of San Francisco’s Noisebridge hackerspace, and a major advocate and supporter of the hackerspace movement) visited BloomingLabs as part of his Midwest hackerspace tour and held a soldering workshop there along with Jimmie Rodgers and Matt Mets of Make Magazine.

In 2011, the group participated in the 4th Of July parade, with a float featuring smoke ring and twinkie cannons, Joe's homemade guitar, and the strandbeest built by Charlie and Ross with lots of help from the rest of Bloominglabs. Following the parade, they moved to their new and current location at 3927 W Roll Ave.

The group held workshops in 2011 including 2 joint bugbot workshops with Wonderlab, a contact microphone workshop with the band CMKT 4, and some Introduction to Arduino classes.

Bloom Magazine published an article about Bloominglabs in the August/September 2011 issue. [1]

Future plans include working on fun and interesting projects, holding more workshops, and bringing more members into the group.

Bloominglabs holds meetings on Wednesdays from 7:00-10:00pm that are open to the public. The group is open to people of all ages and levels of knowledge, as long as they have an interest in and enthusiasm for making things, and they treat the space and other members with respect. Full members pay monthly dues which go toward rent on the space and other needs, including tools and materials. Members have access to the space and tools throughout the week in addition to meeting times.

In addition to the weekly public meeting at 7pm, Bloominglabs conducts workshops, classes, and participates in events in Bloomington and Indianapolis (LinuxFest, InConJunction Sci-fi con in Indianapolis, Mini Maker Faire, and more). More info on upcoming events can be found on the Calendar of events.