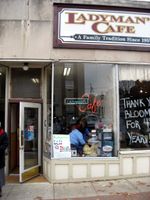 Ladyman's Cafe is a small restaurant that opened on Kirkwood Avenue in 1957 in it's current location. It's known for it's simple, home-cooked meals and fresh-baked pies. The resturant closed on December 10th, 2006.

Read more of this article