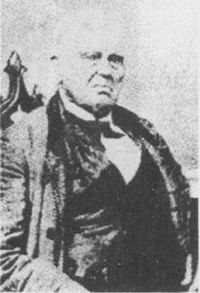 John Ketcham (September 10, 1782 - February 5, 1865) was a Colonel of the 20th Regiment of the Indiana state militia, surveyor, contractor, and politician. Born in Washington County, Maryland, he moved to Louisville, Kentucky as a child. In 1811, his family moved to land in what is now Jackson County, Indiana.

Ketcham died in Bloomington. John Ketcham is buried at Ketcham Cemetery which is located east of Victor Pike and north of Fluck Mill Road in Clear Creek Township. His wife Elizabeth Pearcy Ketcham is buried there too. There are several generations of Ketchams buried in this private cemetery surrounded on two sides with a stone fence on a hillside above the banks of Clear Creek.