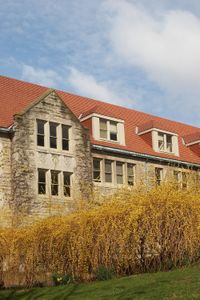 The oldest part of Joseph Amos Franklin Hall, at 601 E. Kirkwood Avenue, was designed by Patton & Miller and completed in 1907. The original structure is pictured here. Maxwell Hall, originally a library, was made the home of the Law School after construction was complete. A major addition to the building was designed by Robert Frost Daggett and completed in the 1920's. In 1972, after the main library was built, it was renamed the Student Services Building, and later renamed after Franklin in 1988. Franklin Hall and Bryan Hall flank the Sample Gates near the intersection of Kirkwood Avenue and Indiana Avenue on the west side of campus.

The building, while still serving as the library, was damaged by fire in 1969.

Franklin Hall was for a time home to the Office of the Registrar and Office of the Bursar as well as IU Parking Operations, Classroom Technology Services and several other departments. It has since been remodeled as a home for the Media School. What was originally the library's reading room is called President's Hall, a large meeting room.