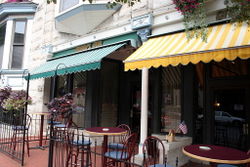 Glory Days Pub and Grill is a pub style restaurant for locals located downtown on College Avenue with entrances from the street as well as from inside Fountain Square Mall. It features a bar and outdoor seating. They maintain a second location named Showers Cafe in the downtown area.

Bobby's Pub was one of the restaurants that was very opposed to Bloomington's ordinance banning smoking cigarettes in restaurants and other public facilities.