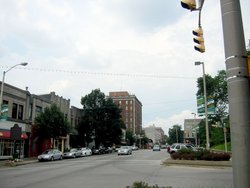 Looking north on the square

Originally, College Avenue only ran from 11th Street (formerly called North Street) to Dodds Street. In 2007 several Sharrows were applied to the right-most lane of College Avenue in the vicinity of downtown; the intent of the Sharrows is to provide a safe lane for bicyclists to use while on College Avenue.