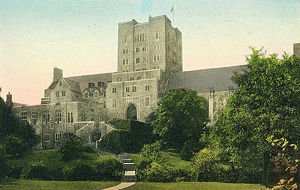 The firm also designed the office building for the Indiana Limestone Company in Bedford, Indiana in 1927.