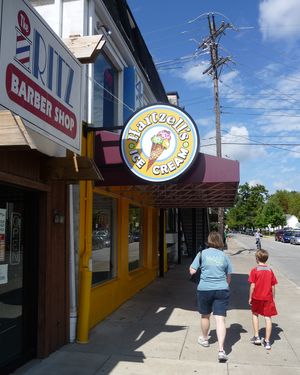 Hartzell's Ice Cream is a downtown ice cream store located at 107 N. Dunn Street. Ice cream is made in house and can be ordered in cones, cups and a variety of traditional treats. Soft serve in a wide variety of flavors is also available and can be mixed with more than 50 mix-in ingredients. Fat free yogurt and Carbolite frozen items are also available at Hartzell’s. Malts,

Hartzell's opened in 2009 when Hartzell Martel, a former manager at Jiffy Treet (Kirkwood) decided he wanted to open another downtown ice creamery. Although he originally intended it to be another Jiffy Treet, the owners of that franchise declined to license the name.

The store is in the same location as former ice cream stores D.P. Dough and White Mountain used to be. The phone number is 332-3502.