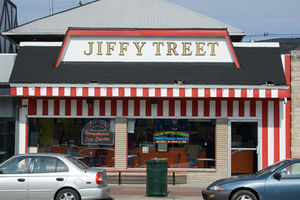 As seen from across Kirkwood Avenue

Eventually the building was purchased and demolished, and at that time there were no ice cream parlors in the Kirkwood area until The Cereal Barn & Peanut Butter Cafe began offering ice cream in May of 2007.

Jiffy Treet downtown has recently been reincarnated as Hartzell's Ice Cream. “We were going to open up a new (Jiffy Treet), but we were told that we’re not allowed to use the name that was trademarked by the original owners,” said Martel, who is reopening where D.P. Dough and White Mountain Ice Creamery used to be. (Quote courtesy of the Herald-Times Online).[[1]] 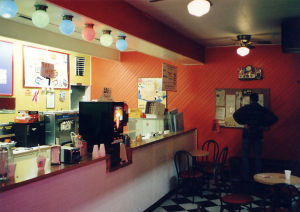 Inside the shop, by Andrew Stoeckley.