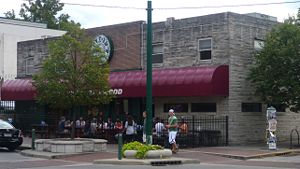 Kilroy's is a popular bar in Bloomington, located at Dunn Street and Kirkwood Avenue. Kilroy's initially opened as just a restaurant in 1975, with a beer license the following year. In 1982, the establishment obtained a full liquor license and expanded greatly.

Kilroy's plays '80s rock, and the song 'Take Me Home Tonight' is a favorite. When the song is played, patrons stop what they're doing to sing along, and it has become a signature of the bar.

Any and all patrons of Kilroy's on Kirkwood must be 21 or older to enter; families with minors and minors accompanied by a parent/guardian are not allowed. This is reported as a recent (as of May 2007) change in policy.