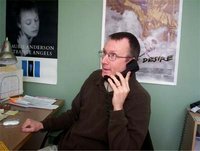 Lee Williams is a co-founder of the Lotus World Music and Arts Festival. He started DJ'ing at Bullwinkle's nightclub in the late 70's and helped co-found the Second Story live music venue above Bull's. He worked as the booking manager at Second Story for a year, then went on to book for Jake's. In 1994, he, along with James Combs and Shahyar Daneshgar, helped organize the original Lotus Festival. He is currently the Executive Director/Artistic Director of the festival.

Born in New Albany, Indiana, Williams' family moved around a lot when his Air Force father was re-assigned. He credits his varied experiences in other cultures with his passion for diverse world music.