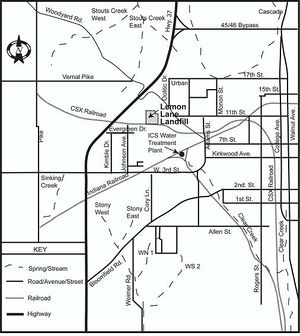 EPA map of the landfill

One of the major locations of PCBs in Bloomington, Lemon Lane Landfill is located on the northwest side of town on the corner of Vernal Pike and SR 37. It is a Superfund site.

Situated on a series of sinkholes, the landfill catches rainwater which goes underground and later bubbles out at the Illinois Central Springs, the headwater of Clear Creek.

The landfill began operation as a refuse dump in 1933. The City of Bloomington operated the landfill from 1950 to 1964 as a municipal waste landfill. It was also used as a repository for industrial debris and waste. Electrical capacitors from Westinghouse were deposited in Lemon Lane Landfill from 1958 to 1964 by contracted local waste haulers; these capacitors were filled with PCBs and, when broken, would contaminate the area.

In 1981 the city sued Westinghouse and Monsanto for $327 million over PCB contamination at the landfill and at other sites.