Jonathan Marion Hinkle (April 3, 1852-February 8, 1899) was a leading Bloomington businessman, as well as sheriff of Monroe County from 1884-1892 and auditor from 1892 - 1896. He was probably the first Democrat to carry Bloomington Township in his second run for sheriff. He ran a butchering and pork packing business before and after his political offices. He was responsible for the creation of a brick business block on Kirkwood Avenue adjoining the Troutman & DeMoss Building and for a time was the owner of quite a bit of Monroe County real estate. 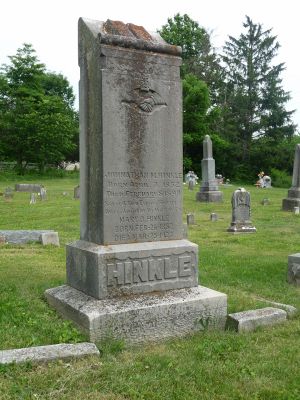 Born and raised on the old Hinkle homestead 3 miles northeast of town, Marion Hinkle was the second son of Jonathan Hinkle and had 12 brothers and sisters. In 1877 he married Mary Ohio Headley, daughter of Benjamin Franklin & Eunice Elizabeth (Morse) Headley, and they had 13 children: Cora Jane (Hinkle) Rogers, Unknown Infant Hinkle, Grace Hinkle, Samuel Hinkle, Charles Hinkle, Gertrude "Gertie" Hinkle, Harvey H. Hinkle, Grancie M . Hinkle, George Washington Hinkle, Thomas Jefferson Hinkle, Omer Hinkle and Fern (Hinkle) Bunger. In 1899, while attempting to walk from town to the Hinkle farm, he lost his way in the deep snow and cold, and froze to death. He is buried in Bethel Cemetery.