He was killed just after 6:30am when was stuck by Hans Addleman's Ford F150 while Jordan was standing in the middle of east bound SR 46 on October 24th, 2006. He didn't have any form of identification on him at the time. There was no indication of why he was standing there. 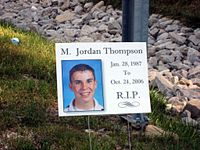 A memorial of flowers was placed at the scene of the accident soon afterwords. In late August of 2007, a sign with Jordan's picture and name was put under the highway info sign on the right side.

On October 24th, 2007, the 1 year anniversary of his death, 5 or 6 people gathered around the roadside memorial shown here at 8pm for a remembrance. It looked like they had candles lit on the ground.