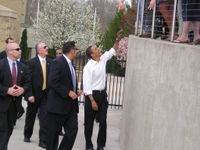 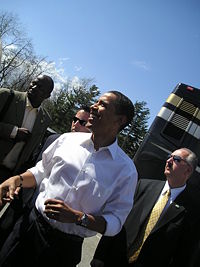 Obama shaking hands with those outside the Women's Little 500 race on April 11th, 2008.

Senator Barack Obama visited Bloomington between campaign stops in Columbus and Terre Haute on Friday, April 11th, 2008. Senator Obama arrived at Bill Armstrong Stadium just before the beginning of the Women's Little 500 race and stayed for about one hour. The Senator then visited Nick's English Hut for a quick walk through with Mark Kruzan and Baron Hill before departing for Terre Haute.