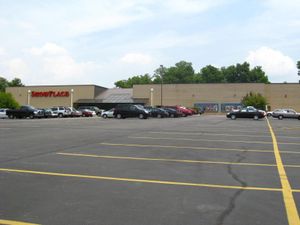 As seen from the parking lot

ShowPlace East 11 is a movie theatre with 11 screens at the Southeast end of Bloomington. It is located on the east side of Bloomington on south College Mall Road. In a way marks of the current south east corner of commercial businesses in the city, as it is mostly residential and light industrial beyond that. It last known manager is Mike Reinhardt.

For a long time, this theatre showed almost all the mainstream movies that showed in Bloomington. When ShowPlace West 12 opened in 2000, a majority of the mainstream movies started showing there, however an agreement was struck and several big movies continued to show at the east location. Nowadays, most of the movies that show at East are ones that cater towards college students.

The theater was owned for many years by Kerasotes Theatres, but has been sold to entertainment conglomerate AMC Entertainment, who also owns the only other commercial theater in town, ShowPlace West 12. As their answer to Kerasotes Theatres's "Five Buck Club", AMC has a discount matinee price. All shows Monday through Thursday and before noon on Friday through Sunday, are $5. All shows the rest of the time, including holidays and openings are $10 (7.50 for Fri-Sun afternoons, and 5 for children).