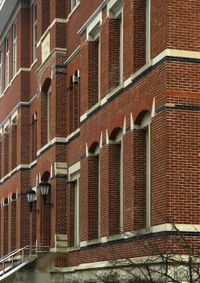 Wylie Hall was the first building built on the new Dunn's Woods campus, in 1884. It was named after both Andrew Wylie and Theophilus A. Wylie, and originally held the library and the chemistry department. Wylie hall currently houses the IU Department of Economics, L.A.M.P., and a UITS STC computer lab. 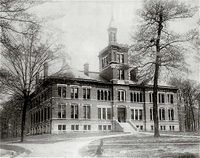 George W. Bunting of Indianapolis was the architect and Hiram J. Nichols of Bloomington was the general contractor. It was originally a two-story building with a spire and tower, but in 1900 a fire destroyed the upper part of the building, and it was rebuilt as a three-story building without the tower. The rebuilding process was not without its difficulties.

The architects for the rebuild were Louis H. Gibson of Indianapolis and John Nichols of Bloomington. Based on letters in the files of University President Joseph Swain, it appears that Gibson was primarily responsible for the overall design and Nichols created drawings based on that design and supervised construction. Gibson and Nichols had worked together previously on Swain's home on East Third street, and Gibson had written to Swain in that context "I have the utmost confidence in your local architect". But that was to change.

On February 27, 1900 Gibson wrote to Swain's secretary requesting that a wire be sent to Swain requesting Swain stop in Indianapolis as he returned from Chicago to Bloomington. The requested wire would read "Gibson wishes you to return via Indianapolis. He has seen Nichols and wishes to consider construction details with you."

As things progressed, problems did arise.

On January 8th, 1901 Gibson wrote to advise Swain not to settle but to hold out for the full amount. Gibson requested another $75 in fees for activities beyond the normal work of an architect, but did not insist. After the completion of Kirkwood Observatory and Wylie Hall Nichols worked as supervising architect during the construction of the Student Building and designed the power plant built in 1904. Gibson later designed and supervised construction of the Science Building (Lindley Hall).