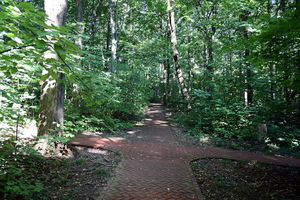 Dunn's Woods is the wooded area in the middle of the Old Crescent on the Indiana University campus in Bloomington. The Kirkwood Observatory is in the western edge of the woods and it is bounded by; Lindley Hall, Maxwell Hall, Bryan Hall, Kirkwood Hall, Owen Hall, Swain Hall, and the School of Law.

Dunn's woods was originally the 20 acre plot purchased from Moses Fell Dunn in 1883 for the "new" campus. This was when IU was located at Seminary Square. What is now known as "Dunn's Woods" is what remains of the original 20 acre plot, after the Old Crescent was built. All of the buildings in the Old Crescent lay on that original tract of land. In the period when both campuses were still in operation, people usually called the new one the Dunn's Woods campus. 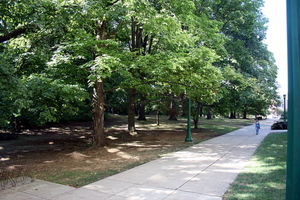 These woods are not to be confused with Dunn Meadow, a nearby area located immediately north of the IMU, the Student Building, and Franklin Hall.