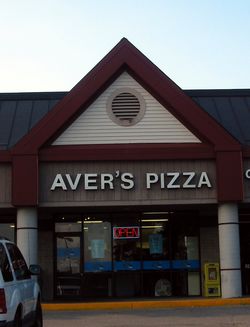 Aver's Pizza is a locally owned and operated take-out, delivery, and dine-in pizza establishment which produces a variety of creative and original pizzas.

Aver's was started on October 25th, 1995 by Brad Randall and Kris Kaiser, and was financed by cash advances on credit cards and donations from family members. In the beginning, the two worked long hours by themselves to get lunch and dinner business. An ad in the Bloomington Voice in December 1995 got the ball rolling.

A 'topping of the week' campaign, which later evolved into the 'pizza of the week' campaign utilized some unusual and creative ingredients such as red potatoes and baby clams. While this campaign is no longer active, some of the better creations that came out of it are still on the menu today.

In the 2nd week of January 2012, they opened up an east side location on Covenanter Drive next to Kroger's. This later moved to 1285 S. College Mall Road, and offered dine-in at this location.