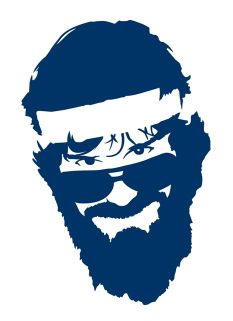 BJ Sunfire is a Bloomington rock performer and rapper who bills himself as being "Monroe County's Premiere Rock Vocalist." He is recognizable for his dark sunglasses, ratty beard, personalized airbrushed baseball cap and frequently donned short shorts. He performed frequently between 2004 and 2006 as a solo performer, in the folk-rock duo Acoustic Animals, and with his full rock ensemble The Bucknaked Badasses. BJ has appeared in two short films by 19th State Productions, The Gulf War Syndrome and Studio Studs.

BJ is known as a passionate and lusty performer who hurls himself with reckless abandon into his music. His self-deprecating humor, tendency to go off on fanciful tangents, and positive messages of self-worth and living free of shame tend to endear him to his audience.

BJ's solo work is a sort of primitive techno-pop, employing low-budget keyboards and drum machines and an unpolished recording style, which frequently includes small flubs and relics of tracks that have been recorded over. BJ believes that these mistakes are an organic part of the music, and that the whole truth isn't conveyed to his audience if they are polished over.

Comprised of BJ and his long time friend and collaborator Boston McReady. Highly influenced by the epic imagery and performance ethic of legendary songwriter Jim Steinman, the brains behind Meat Loaf's seminal Bat Out Of Hell.

This is a sort of supergroup created by BJ to bring his persona and songs into a full-blown rock setting.

BJ has only officially released music recorded as a solo act, though he has made recordings by Acoustic Animals and The Bucknaked Badasses available via his MySpace profile. Plans are afoot for an anthology of all of his recordings to date, and he has expressed interest in taking advantage of the singles-based career model gaining more relevance as CDs are increasingly rendered obsolete by new technology.

BJ has been living a rambling life on the road for many years, claiming to have been employed by the Green Bay Packers as a special locker room assistant during their past two NFL seasons. Electronic dispatches made via his MySpace blog included disturbing accounts of run-ins with a mysterious man known as "Reverend Brute."

He briefly returned to Bloomington in 2008 and recorded a single with musician and recording engineer Mike Adams, Husky Boy Bounce. In 2013, he dropped the hard-hitting indie nerd-core hip hop album "Smash Nut Trippin'".