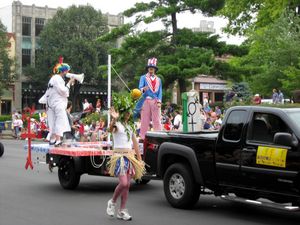 Beanpole is the god of pointless behavior. It is also a group of people that participates in the 4th of July Parade every year in Bloomington. They have been doing so since 1996 and are many a crowd favorite. They are basically an anti-status quo group that do unique things with their spot in the parade, while their leader Nathan Cambridge shouts through a megaphone that Beanpole is the god of pointless behavior, wishes people a happy 4th of July and says in America you have the freedom to do whatever you want. He also says many other things that are now lost in time. Some people think that they are stressing creativity and encouraging people to do more with their lives, showing that they are expressing their freedom to do such things. Other people think that they are making fun of people who sit and watch parades.

According to an interview with the HT, the group is not promoting anything really, just trying to do something different to stress that there are different things to do. Nathan said that since the group was created, people involved with it have taken the concept to other cities like Seattle and even other countries like China and Turkey.

Their floats are usually off the wall creative and sometimes have been fairly tall for a Bloomington parade.

Gallery from over the years