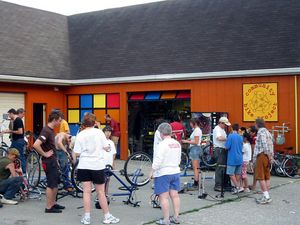 The Community Bike Project during their "open hours"

The Community Bike Project is a program to provide bicycles for people in the city. Volunteers direct an open public workshop, where community members have free access to tools and miscellaneous bike parts. Donations and new volunteers are always welcome and greatly appreciated.

A bicycle project for Bloomington was first envisioned by members of the Center for Sustainable Living in 1997. Charles Hammond, Youth Bicycle Education Network member and founder of the Bicycle Action Project (Indianapolis), was invited to present to CSL members about Youth Bicycle Education. He offered to make used bikes available to the Center if they chose to start a bicycle project. In the spring of 1998 Larry Mongin, Christine Glaser and two other CSL members began research for the bike project, including a visit to the Bicycle Action Project. 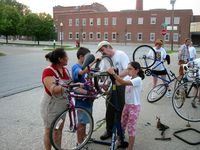 The Community Bike Project truly began in 1998 as a Yellow Bicycle Project under the leadership of David Maluski. As many longtime Bloomington residents still remember, approximately thirty bicycles painted yellow were released in downtown Bloomington. Many of the bicycles were stolen or vandalized. The Center for Sustainable Living fostered the Bike Project and provided it with 501(c)3 non-profit status. Working with the CSL, David Grote took the helm in 1999, at that time working with tools and bicycles inherited from the Yellow Bike Project out of a garage behind a house on Madison Street. 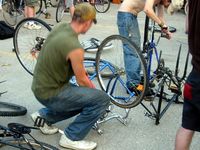