Approaching from the south

The Greene County Viaduct, which is officially known as Bridge X75-6 and also known as the Richland Creek Viaduct and the Tulip Trestle, is a half mile long train bridge in Greene County, about 21.75 miles from Bloomington (from the intersection of SR 45 and Curry Pike) between Solsberry and Tulip. Work on the bridge started on May 22, 1905 when a ground breaking ceremony was led by Joe Moss. It was finished in December of 1906 and is the third longest bridge of its kind in the world. It has 18 towers for support.

Two 45 foot sections were added to the bridge in 1916. Other than that, the bridge is as it was when it was originally constructed.

This bridge is out in the middle of nowhere and you can only get to it via a single dirt road. From Bloomington, take State Road 45 south-west until you reach a fork in the road, keep going straight and to the right where the road turns into SR 54. Keep going until you reach CR 530 E (Greene County), turn right and follow the road. You will curve around a lot and go down a steep hill with a stop sign at the end. Turn left and drive about 200 feet, across a small bridge and turn right onto CR 230 N, which is a dirt road. Keep following this road until you reach the viaduct. You can't miss it. The map below shows the path you can take in green from SR 54 to the viaduct. The blue path shown on the map is private property. Permission is needed to enter the field and the foot path up the hill. 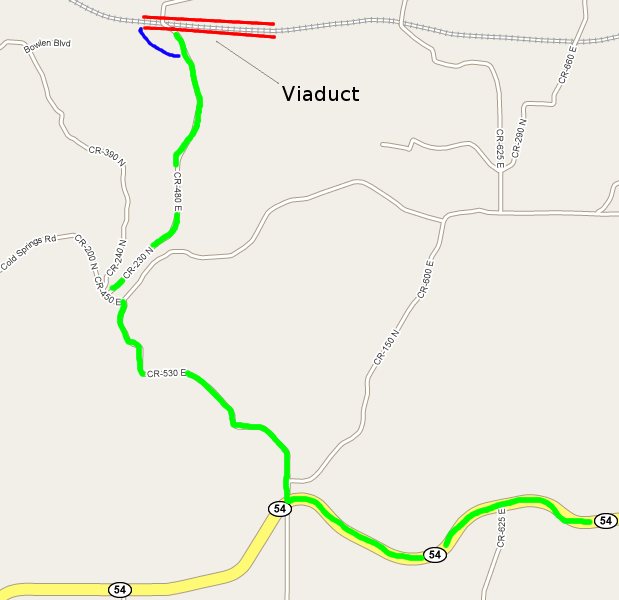 When the Indiana Rail Road's Santa Train passes over this viaduct once a year, there are often people down in the valley waving at the train.

The support structure as well as the trestle portion of the bridge has a large amount of graffiti on it. Especially close to the access road. One of the more recognizable messages are the words "MICHELLE WILL YOU MARRY ME?" written in large letters across the south side of the bridge towards the middle.