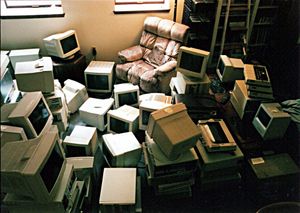 Hardware Recycler was a short lived computer recycling business in Bloomington and Stinesville run by Nate Johnson and Mark Krenz. It opened and closed in the year 2000 and briefly had a warehouse and sales location out in Stinesville. They were going to sell working computers and components over eBay and one their website which was at hardwarerecycler.com.

Background and why it failed

The idea came about after Mark had won 3 wooden palletes of computer equipment from the IU Surplus Store for $300 and sold most of it for a total of $2100. Among other things, the palletes that Mark originally won in the auction contained 26 monitors, most of which worked ok and 18 Pentium class computers with working components. In 1999, it was easy to sell this type of equipment on places like the iu.classified newsgroup and amongst friends.

Nate and Mark thought that they could start a sustainable business by continually bidding on palletes at the surplus store that had useful parts. However about the same time they were preparing to start bidding, the IU Surplus Store changed their strategy for getting rid of stuff and starting taking many useful parts out of the computers on the shrink wrapped palettes that were up for auction. The components included hard drives, ram, keyboards, mice and monitors all being sold at prices comparable to what you could find on eBay at the time. Without realizing that many of the computers had been gutted, Nate and Mark bought 6 palettes of unsellable junk for about $700. Nate was able to sell some items like a 4U Compaq server with all its components and an SGI workstation, but a lot of the other stuff was useless.

The warehouse was vacated a couple of months after they started using it.