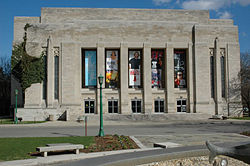 The Indiana University Auditorium is a large multi-purpose auditorium in the heart of the IU campus. It is used for concerts, broadway shows, speeches and many other types of performances. Among its many ammenities it has 3,154 seats, a balcony section, orchestra pit, a 4,543 pipe Schantz organ, a 3,700 square foot stage, hospitality rooms and a 4157 square foot Foyer.

The Auditorium was built during the Great Depression as part of the Works Progress Administration program. The Auditorium was the first building designed for Indiana University by New York architectural firm Eggers and Higgins. The Auditorium opened on March 22, 1941. Closed for a $13 million renovation and restoration in 1997, the Auditorium reopened in 1999.

On permanent display in the Auditorium’s Hall of Murals are the highly acclaimed Thomas Hart Benton Murals, which depict the industrial and social progress of the state of Indiana. Originally painted by Thomas Hart Benton for display at the 1933 Chicago World's Fair, many of them found new homes in the Auditorium. During the renovation, these murals were delicately cleaned and restored, and now are as vivid as the day they were installed. Also on display is the Daily Family Art Collection, which features the work of Indiana artists. 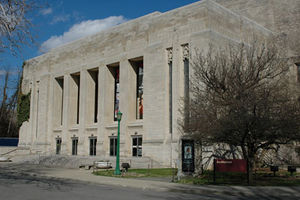 The Auditorium as seen from the southwest corner

The Auditorium is the primary commercial concert and show venue at Indiana University. The hall seats approximately 3,200 guests and has hosted a large variety of performers, including Seinfeld, Itzhak Perlman, and many touring Broadway musicals.

The IU Auditorium is normally open Monday through Friday from 10 a.m. to 5 p.m. For more information, call the Box Office at 855-1103 or visit IU Auditorium.com. 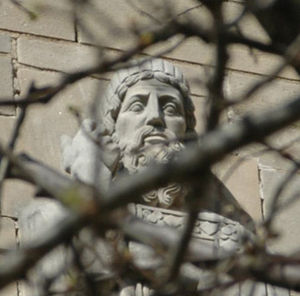 A graven face on the south façade of the Auditorium