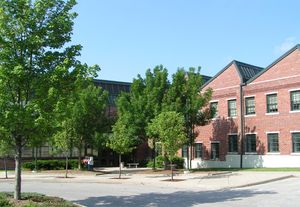 IURTC at the IU Research Park

Started back in 1997, IURTC was created by the IU Foundation at the request of then IU President, Myles Brand. The Indiana University Research and Technology Corporation (IURTC) is a non profit organization that was created to deal with all IU Trademarks, Business Development, and Intellectual Property. They were also made to hold equity in other corporations as part of licensing deals. IURTC actually has a contract with IU which allows them to do what they do. The contract allows them to deal with the functions of Technology Transfer; and also formerly the IRLP (Industrial Research Liaison Program), Corporate Development, Licensing & Trademarks, the KEP (Kelley Executive Partners), and the IU Research Park. IRLP is now a program of the Indiana Economic Development Corporation; Licensing and Trademarks is now under the IU Purchasing Department.

IURTC’s main task is to turn intellectual property created at IU into revenue. They also want to benefit medical research and life science, working with such facilities such as MPRI and Marcadia Biotech. The two main departments of IURTC, Tech Transfer and Engagement, both have important roles. Tech Transfer has to deal with many jobs such as assisting entrepreneurs, developing and negotiating licensing agreements, and forging close ties with the industry. In addition to that, IURTC also must protect the inventors’ rights as well as Indiana University’s rights with patents, trademarks and/or copyrights.

During their eleven year history, IURTC has had four different presidents. The first was Doug Wilson who served a three year tenure from 1997 to 1999. The second president was Ron Henriksen, who also served a three year tenure from 1999 to 2002. The third president was Mark Long, who started in February of 2002 and served until March of 2008. Anthony Armstrong is the current president of IURTC. There are approximately 50 to 100 people who work at IURTC, but there is never a deinate number to the incoming and outgoing interns who serve tenures working at IURTC. IURTC has two locations, the one they started at in Bloomington (Research Park) and one located up in Indianapolis.

Even though IURTC has not been around that long, the most famous accomplishment they have is turning MPRI (Midwest Proton Radiotherapy Institute) into its own separate business. MPRI is actually one of only three such cancer treatment facilities in the U.S. Another accomplishment by IURTC was the 257 invention disclosures that they had in 2006. This is a one year record for IURTC and is far above their 127 disclosures in 2005. Some of the inventions they had were a device that delivers bone grafts, a nano-material that can restore tooth enamel, a biocompatible coating for artificial implants, and a computational method for identifying disease proteins as drug targets. Another important past move for them was the making of the first IU business incubator. IURTC purchased a building with help from the IU Foundation and the building would become known as the Indiana University Emerging Technologies Center (or IUETC). IUETC is a biotechnology business incubator which was made to form and nurture new businesses that work in the field of life and health sciences.

IURTC originally was only located at the IU Research Park (also known as the Showers Building) and was divided into the Office of Technology Transfer, the IRLP, the Licensing and Trademarks Office, and the Office of Corporate Development. Later on, the Kelly Executive Partners was added, but was not initially there at the start. The second building was built up in Indianapolis in 1999 to increase production. Five years later, the IUETC was constructed and finished in September of 2003 on West 10th Street in Indianapolis. It is the first of a proposed four incubation buildings that will help other up and coming companies.

IURTC is also in a sort of friendly competition with other companies like its own, mainly the ones in the Big Ten. They have seven full-time licensing employees in Technology Transfer, which is actually last in the Big Ten, but they are fifth in revenues received. The annual budget for IURTC is $2.4 million, which isn’t as much as other companies receive, but IURTC is actually one of the younger companies. There are other colleges that have done great things in the same field of work that IURTC is in, like Stanford which brings in four hundred million dollars a year, and Florida which created Gatorade. So while IURTC hasn’t accomplished as much as some other companies have, they are still growing and should continue to make progress.