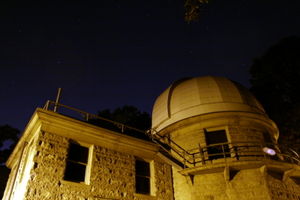 The observatory under the stars

The observatory is a facility run by the Department of Astronomy/Astrophysics and is located in the western edge of Dunn's Woods in the Indiana University campus in Bloomington. It is named after astronomer Daniel Kirkwood. The facility houses a 12 inch refracting telescope as well as various other instruments.

The building was designed by local architect John Nichols.

The previous observatory, called the Knightridge Observatory, was on SR 446 across the street from the Eastview Church of Nazarene It was built by W.A. Cogshall, head of the astronomy department, over the years 1920-1936. It was abandoned in 1948 when Goethe Link donated an observatory in Morgan County to the university. It stood abandoned until 2020, when it was demolished.