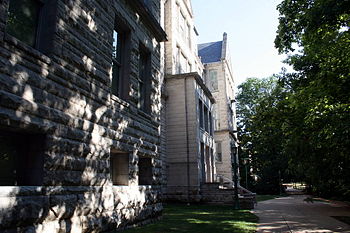 From the north-west corner

Ernest Hiram Lindley Hall was originally built in 1902 and simply named Science Hall. (It was later named after Lindley in 1957.)

It is currently the home of the Kinsey Institute.

When built, Science Hall had five floors, with large lecture rooms for the physics and philosophy departments. The east half of the second floor was devoted to administration, with President Bryan having a private office. The physics department occupied the first floor and basement. Departments on the other floors included Philosophy, Psychology, Pedagogy, and Mathematics.

This was the second Indiana University building called Science Hall. The first was located on the original Second Street campus.