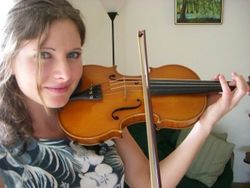 Playing for fun in front of the 4th Street Post Office

Maristella Patuzzi (b. February 14, 1987, Lugano, Switzerland) is a classical violinist and student at Indiana University. She started playing violin at the age of four and won national competitions as early as age nine. At the age of ten she held her first concert with an orchestra at Cathedral of Lugano in Switzerland.

Under the guidance of Mark Kaplan at IU's Jacobs School of Music, she earned a Master's degree in violin in 2008.