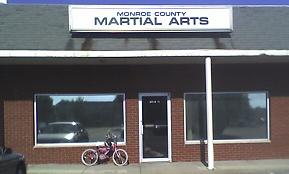 Founded by Steve Scott and Linda Scott in November of 1991, Monroe County Martial Arts has been teaching Tae Kwon Do, T'ai Chi, and many other forms of hand-to-hand combat for more than 15 years. The business has a studio in the Williamsburg Village shopping center and also runs a class for 4 and 5 year olds at the YMCA. MCMA has consistently won awards for the "Best Martial Arts School in Bloomington".

Steve Scott challenged Rick Weidenbener to a push-up contest in 2005. The two men raised pledges per pushup with donations going to the YMCA. Over three years, the challenges raised more than $10,000, with Weidenbener taking two of the three matches.

The Scotts choreographed the fight scenes for the opera "Nixon In China" when it was performed at the Musical Arts Center.